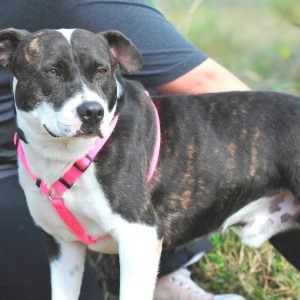 Torres came to the shelter back in August. He was so timid and scared that you could hardly raise your hand to pet him without him cowering and running to the back of his kennel. He has a rather wide scar on the back of his neck where a collar once was, likely weighed down by a very large and heavy chain.

This guy definitely had a hard life before coming to the shelter. However, with the dedicated staff and one particular volunteer determined to show him that a raised hand can be a loving hand, he’s begun to turn a corner and come out of his shell. Behind his kennel door, Torres is an excited ball of energy, ready for that human connection. Once on a leash though, he’s not sure what the heck is going on. It’s obvious he was never leash trained or taken for a proper walk on-leash. Any noise or shuffling gravel behind him and he starts to spin in circles in flight mode. He’s scared of the bridge and running water noises that lead to the walking trail and to the park, so for now the sidewalk next to the shelter is as far as he’ll go. That volunteer has made it his mission to get Torres on a full walk one day.

Torres doesn’t realize what he’s missing on walks, but he certainly has enough fun for now with toys. This guy LOVES TOYS! He’s like a kid on Christmas morning when he sees a toy. He also likes soft blankets and regularly rearranges his on his kennel floor before settling in with his favorite toy.

Torres has a bad past, but we’re only concentrating on his future. We really think the sooner he can get into a one-on-one household setting, with a caring human(s), he’ll be a confident pup in no time.

If you would like to meet Torres, shelter visiting hours are between 10am and 3pm everyday of the week, including weekends. You can also call the shelter for more information, or to set up a meet and greet, at 512-352-5483.