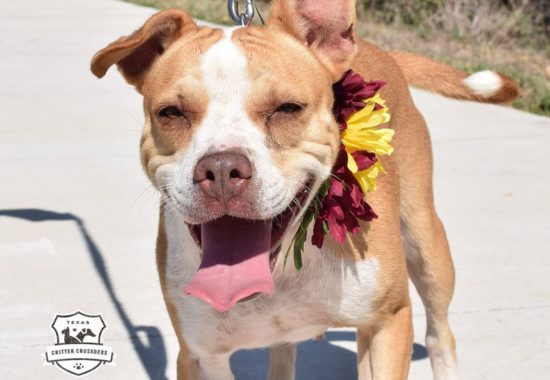 I’m Lolly and I’m your PET OF THE WEEK! That’s right. The humans say I’m sweet as sugar, so they’ve given me this honor. How nice, right? First they give me a place to stay when I’m homeless and now they give me an award! I’m grateful, but I’m ready to move on and sweeten the life with my own forever family. Maybe it can be you? I’m great with kids of the human and canine variety.

PAWS UP to Terra Properties, Inc. for sponsoring my ad and for helping Texas Critter Crusaders help homeless dogs like me. We’re FUREVER grateful! ♥️ 🐾 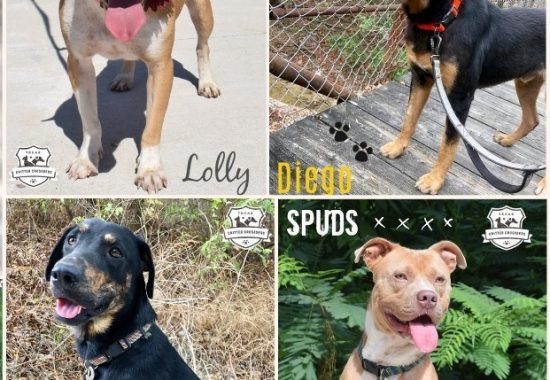 Make plans to find your new family member at Vintique Mall this Saturday, November 9, 2019. The Texas Critter Crusaders will have dogs, cats and kittens available for adoption from the City Of Taylor, Texas Animal Shelter. The event will be from 11 a.m. to 2 p.m. Come meet the cutest, sweetest, most lovable pets on the planet!

Texas Critter Crusaders is a 501(c)(3) non-profit organization dedicated to paying for emergency medical care and more to help the animals at the Taylor, TX animal shelter.

Join Art Off Center to help raise monies for Texas Critter Crusaders during our Pottery for Paws events.

You can purchase a bisque food dish for your pet and raise money for Texas Critter Crusaders to help them support the local Taylor Animal Shelter.

Join us on the sidewalk next to Curb Side Coffee House on a pretty Texas evening. You can purchase a blank pet dish and decorate it for your pet and donate funds to Texas Critter Crusaders.

You’ll decorate the surface, put your pet’s name on, we’ll fire the dish and have it ready for pickup in a few days at Art Off Center on Potter’s Alley.

It all started when I lost my momma. It was a long time ago but still seems like yesterday. Then I stayed in a shelter and then with different foster folks, but it’s time for my FOREVER friend…a place to finally call HOME. I’m not getting any younger here, people. I’m what you might call a “mature” woman. I don’t like the word senior ’cause it doesn’t do me justice. I’m super spunky and young at heart! I love to play with people big and small. Guess what else I love?! BELLY RUBS!!! I could lay around for days as long as you rub my ol’ tumtum. I’m great with adults, kids, and even most dogs. What more could you want in a special lady friend? Contact the City Of Taylor, Texas Animal Shelter or call 512-352-5483 for more information.